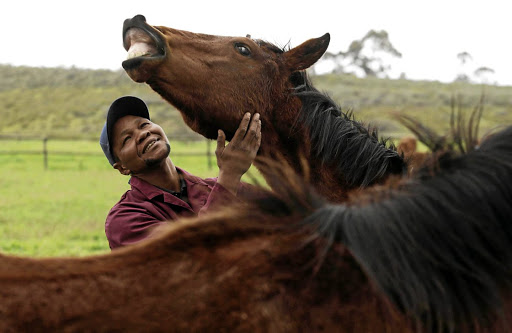 Never look a gift horse in the mouth – unless you intend rearing a potential champion racehorse and selling it for R1.2m.

That’s the remarkable story of a group of stud farm staff outside Ceres in the Western Cape, who turned an act of goodwill into a cash windfall and future business opportunity.

The grooms from Cheveley Stud Farm were given a race-winning mare by farm owner Vaughan Koster. They used her to set up their own stud business and hit the jackpot last month when they sold a yearling to one of SA’s top breeders, billionaire philanthropist Sabine Plattner, for many times their combined salaries.

They intend enjoying a rare burst of disposable income before trying again with the mare’s next foal.

“This is just the beginning,” said farm assistant manager Stoffel Mouton, speaking to the Sunday Times this week among a herd of affectionate yearlings. “We hope to make it a big success.”

Mouton said he and his colleagues were thrilled to receive the mare from Koster, who also helped them with their business by allowing them to use his stallion “shares” with other local breeders.

“He gave us a few options and then we voted to choose a specific one – luckily we made a good decision,” said Mouton, a former groom who heads the empowerment project at Cheveley.

The staff’s stud exploits caught the attention of Plattner’s trainer, Andre Nel, who visited Cheveley before the National Yearling Sale at Emperors Palace in Gauteng two weeks ago.

“I was in love with the colt and blown away by him physically. He oozed class; he looked like the equine equivalent of [sprinter] Usain Bolt, with a temperament and confidence of [Indian cricketing superstar] MS Dhoni.

“Before the horse walked into the ring, I told Mrs Plattner the whole story about the horse and that it was a grooms’ horse, so she was well aware of where the money will be going to before the bidding started,” said Nel.

“We have previously bought a grooms’ horse for R900,000 and the camaraderie felt every time that horse ran eclipsed its individual performance.”

Plattner owns 85 horses, of which about 80% are bred on her farm, La Plaisance, in George.

She is the wife of German software tycoon Hasso Plattner, a co-founder of SAP software company, who is worth R250bn according to Forbes. The Plattners’ assets include Fancourt Hotel & Golf Estate outside George.

Farm owner Koster said he was “incredibly chuffed” about the sale.