Queen Of The Castle

The Silvano filly Equina swooped late for an impressive win in the 52nd edition of the $50 000 Gr1 Castle Tankard run over 2000m at Borrowdale Park in Zimbabwe on Saturday.

Equina finished fast to win in a time of 119.47 seconds, a half length ahead of last year’s winner A King is Born, after emerging from the chasing pack to take the lead in the final 200 metres after Coltrane had looked a winner.

Thus on Easter Monday, the Castle Tankard was born under its first name The Castle Brewery Invitation Stakes,
A field of only seven runners lined up that day.

The race has grown with plenty of South African interest (partly thanks to the weak rand) and seventeen runners lined up on Saturday.

The winner Equina is trained by Amy Bronkhorst with Zimbabwean-born jockey Karl Zechner doing the honours. 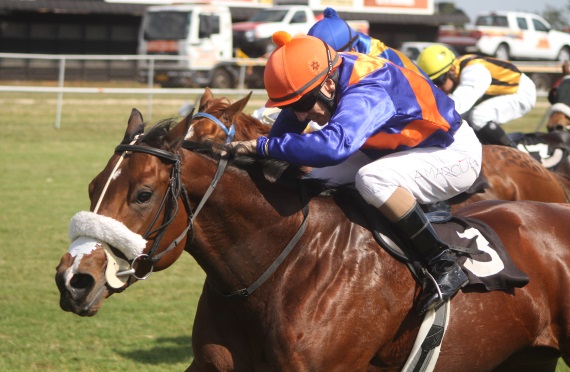 The win was the first time in 16 years that a filly has won Africa’s oldest sponsored race.

Zechner, who is now based in South Africa, was naturally elated after the race.

“At the moment I am over the moon, a Bulawayo boy winning the Castle Tankard!” Zechner said.

He added: “The way things have played with Amy she has prepped the horse to perfection.

“She hasn’t rushed the horse. She has waited for the horse to tell her when she was ready. And today it has panned out very nicely.”

The victory was Zechner’s 226th win in a career spanning over 4032 rides.

The Cheveley Stud bred Equina, was registering her seventh win from 18 runs that have yielded five placings.

She is a daughter of Silvano out of the Al Mufti mare, Winning Touch.

Equine was formerly trained in the Cape by Justin Snaith.

Top South African jockeys Anton Marcus and Chris Taylor were the most successful riders on the day with a double apiece.

Marcus scored in the third race on Wisteria Way, in his first ever ride in Zimbabwe.[/rad_page_widget][/rad_page_container][/rad_page_section]