Michael Muis Roberts, who had a race day in his honour at Greyville yesterday, was not only a fine ambassador for South African racing but his success inadvertently had a positive impact on South African bloodstock.

Roberts was approached one day in the late 1990s by Karen Newsome of Fieldspring Racing and asked about a filly they owned.

Karen’s husband John was the founder of Fieldspring Racing and South African racing will forever be indebted to this couple for the impact their 1997 decision to create a racing base in South Africa had.

The Newsome’s young filly Mystic Spring had not been doing too well racing in England and Karen asked Roberts whether he believed it would be worthwhile sending her to South Africa. She was out of a full-sister to Mystiko, who had given Roberts his first British classic success in the 1991 2000 Guineas at Newmarket.

Roberts recalled, “I told her I didn’t see why not as Mystiko had been a good fast ground horse and that was what you needed in South Africa.”

Mystic Spring was shipped over and put in training with Dean Kannemeyer Racing but didn’t show much and was soon retired to stud.

A couple of months later John Newsome made an arrangement with the great horseman and thoroughbred breeder Wilfred Koster to use the latter’s Cheveley Stud farm as the base for Fieldspring’s breeding operation.

This included bringing about ten imported mares in over a period of a number of years.

Vaughan Köster, who took over Cheveley Stud when his father passed away in 2008, remembered the arrival of a small and slight Mystic Spring at the farm.

He said, “She was very sour and would chase you out of her stable. Perhaps it had something to do with all the travel and quarantine she had endured, but after being put out to pasture her attitude changed massively. She became a happy mare, although to this day she is still very protective over her offspring and with foal at foot you would not enter her stable without caution.” 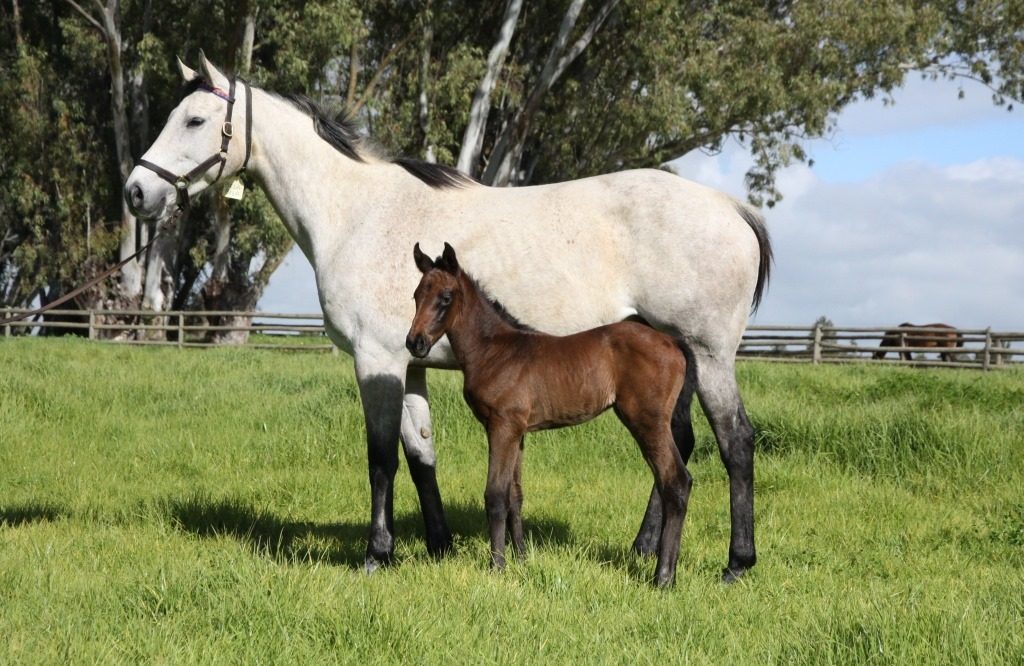 Photo: Mystic Spring with a foal at foot

Vaughan recounted, “It was a complete disaster. He was gangly, had an ugly head and was bad-legged with particularly bad hind legs. My father was given two options by the vets, either put him down or ‘throw him to the mountains.'”

The great horseman took the latter option. “Throw to the mountains” is a saying meaning the foal should not be fed too much, thus preventing too much weight on the legs.

A year later the sales inspectors were “generous” in giving the colt three out of ten as he still had “atrocious legs”.

“But he was very athletic,” recalled Vaughan.

The colt was put in training with the Kannemeyers.

Vaughan recalled, “Peter “PK” Kannemeyer phoned about three months later and told us, ‘This horse can run’. My father laughed and said ‘It can’t be!'”

The grey colt called Rabiya went on to win the Grade 1 Cape Guineas, the Grade 1 Daily News 2000 and the Grade 2 Cape Derby running in Fieldspring Racing’s maroon silks with the grey chevron.

However, his bad legs caught up with him in the most tragic of circumstances as he broke down in the 2005 Vodacom Durban July after starting favourite and had to be euthanised.

Nevertheless, Wilfred’s decision to work through a problem had ensured the foundation of a South African thoroughbred dynasty.

Mystic Spring’s second foal by Goldkeeper, Secret Of Victoria, was small, had the attitude of her mother and went on to become a great broodmare herself.

Vaughan recalled, “One day at the sales when it was time for the string to walk we waited and waited for Secret Of Victoria to appear. Eventually I walked over to her stable and found the groom cowering by the feed trough with her standing over him and refusing to let him move!”

Secret Of Victoria was bought by Garth Miller on behalf of the BBP syndicate due to the speed in her pedigree. Miller’s intuition proved to be lucrative in the long term for the syndicate members, Miller and Basil Nelson, and also for trainer Vaughan Marshall. Secret Of Victoria finished second in the Grade 1 Allan Robertson as a two-year-old and went on to become a Western Cape champion sprinter courtesy of three Graded wins, two Grade 2s and a Grade 3. At stud she has produced two Grade 1 winners, All Is Secret and The Secret Is Out, both bred by the BBP syndicate, both by Captain Al and both trained by Marshall. The Secret Is Out was raced by the BBP Syndicate too.

Meanwhile, in the 2016/2017 season the top class grey filly Bela-Bela, a three-time Grade 1 winner, at last secured Mystic Spring the title she had so richly deserved, the Equus Broodmare of The Year.

Drakenstein Stud own Bela-Bela and she has reportedly produced ” the most beautiful” of foals by Gimmethegreenlight.

Vaughan concluded, “She has never produced sales type ‘wow’ horses as such but they run in all shapes and sizes. With family members now at such top studs as Klawervlei, Drakenstein and Varsfontein they are sure to get the support of top stallions. Whether her daughter’s daughters can also continue her legacy remains to be seen.”