Cheveley Stud owner Vaughan Koster has described the sale of his grooms’ yearling for seven figures as a ‘fairytale’ come true, as the Futura colt ranked among the top ten lots at the BSA National Yearling Sale.

The youngster went the way of Andre Nel of Plattner Racing for R1.2 million (£53,700/€59,700) on Saturday and all proceeds from the sale will be shared between the group.

The colt had been raised and prepared as their own and boasts an attractive pedigree as a son of the 2014-15 Horse of the Year Futura and dual winner Siena’s Star, from the family of champion South African racemare Vesta.

“I’m over the moon for our staff,” said Vaughan Koster in the aftermath.

“R1.2 million is way beyond what our expectations were. The guys are so super-chuffed and I don’t think the reality has really kicked in yet.”

Koster added: “This goes such a long way to uplifting their lives and uplifting their families. It’s tremendous and such generosity from [buyer] Sabine Plattner. And of course to the outbidders too, who are an integral part of it.

“I got more excited about their horse selling for that money than my own horses. I’m extremely chuffed for them – it’s a fairytale and a wonderful realisation for them. Let’s hope it culminates in him being a talented racehorse!” 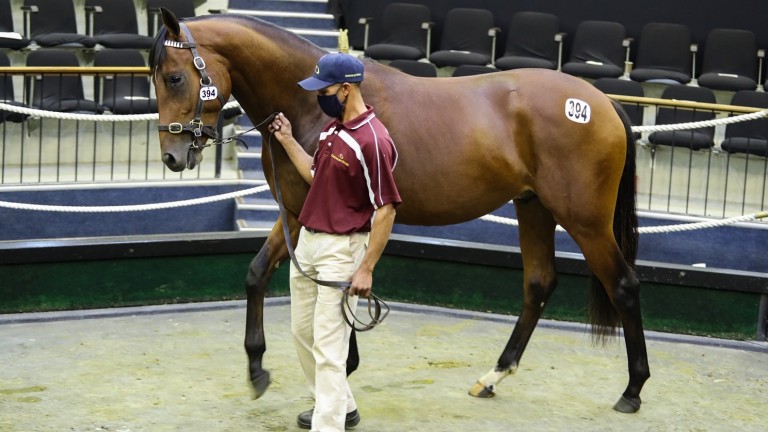 Drakenstein Stud’s first-crop sire Futura has enjoyed a fine run of success lately recording his two first stakes winners, with Nourbese having landed the Grade 2 Golden Horseshoe at Greyville and Dindingwe having captured the Grade 3 Champion Juvenile Cup at Borrowdale Park in Zimbabwe.

Earlier on Saturday, assistant manager Stoffel Mouton received an award for being the highest qualifier to have passed all levels of the stud grooms training in South Africa. 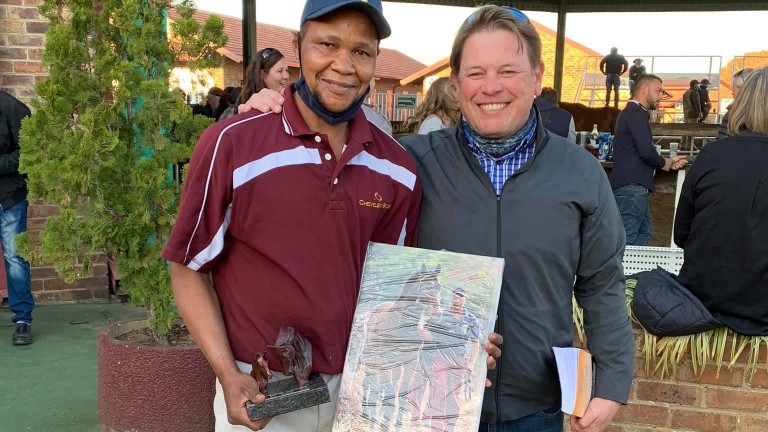 Cheveley Stud assistant manager and award recipient Stoffel Mouton pictured with Andre Nel, who signed for the Futura colt (Thoroughbred Breeders’ Association of South Africa)
Youtube video from Horse Racing – Clocking the Gallop
Many inclusive co-operative programmes have been developed in South Africa for long-serving stud staff and those who have passed specific levels of training, to enable them to become more fully vested in the industry.

These programmes usually include ownership of a mare, with the grooms producing her offspring for the yearling sales.

The most successful of these co-ops to date has been the Riverside thoroughbred co-operative, who were responsible for selling the up-and-coming young stallion Vercingetorix at the National Yearling Sale in 2011.

Vercingetorix began his career in South Africa, racing in the silks of Sheikh Mohammed Bin Khalifa Al Maktoum, and went on to run in Dubai and Hong Kong, with his most notable win coming in the Grade 1 Jebel Hatta. He stands at Andreas Jacobs’ Maine Chance Farms.

What is more, the Mauritzfontein grooms struck it rich at the 2018 National Yearling Sale when selling their Dynasty colt for R800,000.

Bloodstock South Africa waives any entry fees and commissions on the sale of any grooms’ horses, with the proceeds often used by the co-operatives to re-invest in bloodstock.