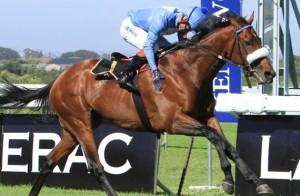 Cheveley Stud, whose recent alumni include the likes of Legislate, Snowdance and Bela-Bela, will once again be offering a top-class draft at this year’s Emperors Palace National Yearling Sale.

The Ceres Farm’s draft is made up of nine lots, with a further yearling offered by Cheveley Stud as agent, and includes yearlings sired by such top stallions as Dynasty, Gimmethegreenlight, Querari, Vercingetorix and What A Winter, as well as by such promising younger sires as Futura and William Longsword.

Outstanding sire Dynasty, whose numerous high-class progeny include the Cheveley Stud bred champion Bela-Bela, is represented in this draft by a colt (Lot 410) bred on very similar lines to the three time G1 winning Bela Bela. This colt, whose G3 winning dam is a half-sister to Bela-Bela, is a half-brother to nine winners, notably dual G1 winner Snowdance, Laisserfaire Stakes heroine Victorian Secret and East Cape Breeders Stakes heroine Juniper Spring. The colt in question gained a notable update to his pedigree when his two-year-old half-brother Captain Fontane recently won impressively on debut.

Dynasty is also represented here by a half-brother (Lot 271) to exported G1 Allan Robertson Championship winner Brave Mary, while his champion son Futura, now one of South Africa’s Leading First Season Sires, has a further two lots in this draft.

Futura is responsible for a colt (Lot 394) out of a dual winning half-sister to Winter Oaks winner Rush For John, while his daughter Embrace Me (Lot 88) is out of former Eastern Cape champion, and four time stakes winner, Clear Sailing.

Cape Guineas winner William Longsword, whose first crop are yearlings, is responsible for a colt (Lot 116) out of a winning half-sister to three black type horses, while the increasingly successful Gimmethegreenlight is represented here by a filly (Lot 212) out of a six time winning three-parts sister to G1 SA Fillies Sprint runner up Maelstrom.

Champion Sprinter What A Winter, sire of this season’s G1 winners Clouds Unfold, Russet Air and Warrior’s Rest, has a colt (Lot 218) out of a five time 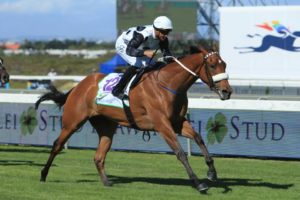 Vercingetorix’s stablemate, and last season’s leading sire of 2YOs in South Africa, Querari has two lots in Cheveley’s National Sale draft. His filly (Lot 406) out of the smart, stakes placed Souk not only numbers the useful Athalia as a half-sister, but also has a full-sister to G1 SA Derby winner Bouquet-Garni as a granddam, while the Querari half-sister (Lot 461) to Swallow Stakes runner up Frederico’s Dream is out of a Linamix own sister to the dam of G1 winning sires Ectot and Most Improved.