Vaughan Koster’s Cheveley Stud, perennially among South Africa’s leading breeders, will be offering a very classy, eight strong (one as agent) draft at the 2019 National 2YO Sale.

Cheveley’s consignment includes yearlings by such stallions as Captain Al, Captain Of All, Dynasty, Soft Falling Rain, Wylie Hall, and the Cheveley bred Horse Of The Year, and resident sire, Legislate. 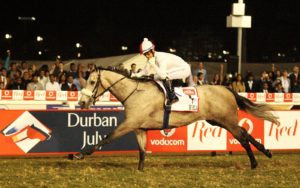 400 000 buy from the 2014 Emperors Palace National 2YO Sale.) This blue blooded colt, a son of Broodmare Of The Year Mystic Spring, is also a half-brother to short-lived champion Rabiya, and the stakes winners Secret Of Victoria (dam of 2 G1 winners), Spring Lilac (dam of multiple G1 winner Snowdance), and Secret Captain, as well as the stakes winning dam of Perfect Promise Sprint winner Amy Johnson.

Another exceptionally well bred two-year-old in this draft is the Captain Al colt (Lot 193) out of the Fort Wood mare Kindling. Bred on the same cross as G1 winners Captain America and William Longsword, this colt is a full-brother to the graded stakes winners Fragrant Al and Captain’s Flame, and also numbers G1 performer Barbosa as a close relative.

Short-lived champion Soft Falling Rain made a great start with his first 2yos in 2018-2019, and the former G1 SA Nursery winner is represented by a colt (Lot 3) out of a dual winning Fort Wood half-sister to G2 winner Mercury Chief, while the very promising Master Of My Fate (whose first crop son Twist Of Fate ran third in the 2019 G1 Vodacom Durban July) is the sire of a colt (Lot 170) whose six time winning dam is a half-sister to 3 stakes horses including G2 Post Merchants winner Mike’s Choice.

Cheveley’s resident Redoute’s Choice sire Wylie Hall made a great start with his first 2yos, and the multiple G1 winner is doubly represented in this draft. Wylie Hall is the sire of a half-brother (Lot 169) to no fewer than 10 winners (including Selangor Cup winner Mercury Chief), as well as a colt (Lot 339) out of a dual winning half-sister to Winter Oaks winner Rush For John. The latter is from the same family as recent G2 winner La Bella Mia.

Horse Of The Year, and four time G1 winner, Legislate has one member of his first crop in this draft –a colt (Lot 375) who is a three-parts brother to G3 Flamboyant Stakes winner Olma, while the very promising Captain Of All is the sire of a filly (Lot 365) from the family of champion filly Kiss Of Peace, and recent G3 winner Palace Of Dreams.